Mozilla has released Firefox 100 for Windows, Apple macOS, and Linux. This article summarizes the most important innovations – as always on this blog in much more detail than on other websites.

100 Thanks – Mozilla thanks its users

With the new version, Firefox has reached version number 100. For Mozilla, this is an opportunity to thank its users. As a result, Firefox displays a small thank you dialog after the update.

On websites supporting the WebVTT standard, as well as popular video and streaming platforms YouTube, Amazon Prime Video and Netflix, which use their own solution instead, Firefox can now also display video subtitles in picture-in-picture display mode.

Firefox on macOS 11 and later now supports High Dynamic Range (HDR) videos. In addition to a corresponding screen, another requirement of battery operation is that the macOS setting “Optimize video streaming while on battery operation” is not enabled.

For Windows users with an Intel GPU, power consumption during video playback has been reduced. Additionally, volume control performance on Twitch has been significantly improved since the update.

Improved handling of color schemes for browsers and websites

Firefox users can choose from several thousand themes. From a browser perspective, this inevitably involves the question of whether the theme is light or dark. Depending on this, Firefox menus appear in light or dark colors. Websites can also be customized to the user’s preferred color scheme. For this purpose there is the so-called Media Query @prefers-color-scheme. This allows websites to make adjustments depending on whether the user is using a light or dark theme.

And for color scheme on websites, users no longer need to find and change a hidden option in about:config. Instead, there will be an option visible in the Firefox settings in the future, which will display the four options: use a light color scheme, a dark color scheme, a Firefox theme color scheme, or the scheme operating system colors. 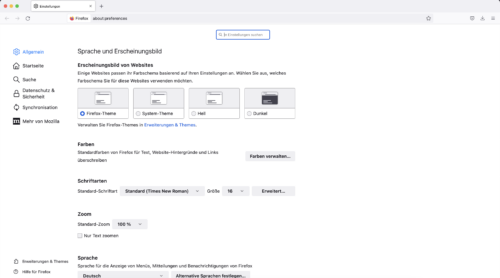 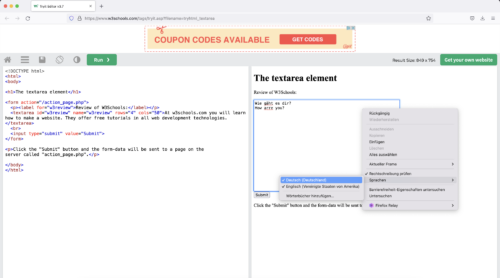 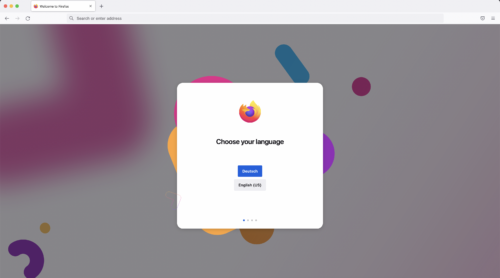 The Firefox language can now also be changed at any time via the Firefox settings without having to restart the browser.

Referrer policies less restrictive than the default policy (such as unsafe-url, no-referrer-when-downgrade, and origin-when-cross-origin) will be ignored for cross-site iframe requests in the future to avoid confidentiality leaks via the referrer to be prevented.

Of course, when version number 100 is reached, the Firefox user agent also changes accordingly, which now contains a three-digit version number. Websites that engage in user agent sniffing should ensure that their browser detection still works as expected.

Several security vulnerabilities have also been closed in Firefox 100. For security reasons only, an update to Firefox 100 is therefore strongly recommended for all users.

Other new features in Firefox 100

On Windows and Linux, overlay scrollbars can be enabled as an option from Firefox 99, and from Firefox 100 they are available by default. Although there is a corresponding option in the Firefox settings on Linux, Firefox on Windows follows the corresponding Windows setting.

Mozilla cites several minor performance optimizations, including deeply nested display: grid elements on websites, improvements to Google Docs and Twitch, and on macOS 11 and later when opening new tabs and switching between tabs.

Changed the appearance of focus lines so that links are more recognizable, especially to users who use them for accessibility reasons. It also unifies focus rows with form fields where they were already presented in a similar fashion.

The about:processes process management now displays the relative CPU load graphically, similar to what is already known from the power consumption column in about:performance.

The notification in Firefox settings when an extension controls an option has been simplified to make it easier to read.

On the private windows homepage, Mozilla once advertises Firefox Klar, its specialized privacy browser for Android and iOS, with which you are permanently in private mode on your smartphone. This notice will no longer appear the next time you open it. 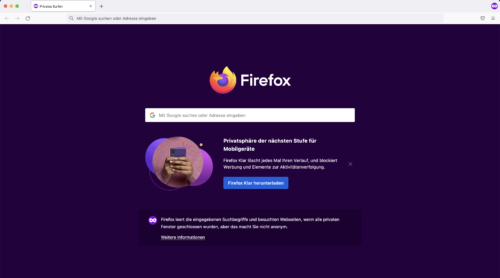 As always, there are more bug fixes and other improvements under the hood.

Users of the outdated Windows 7 operating system should ensure that they have installed Windows update KB4474419 in order to install Firefox 100. The reason for this is that Mozilla no longer uses SHA-1 to sign its software package. installation, but SHA-256, much more secure. Windows KB4474419 update is a prerequisite for Windows 7 to do anything with it. Of course, it would be even better to use an operating system that continues to receive security updates.