Nikolaus-August-Otto-Straße in 53520 Meuspath is something like the second home of Hyundai engineers. At least everyone who deals with the driving dynamics of Korean products. And Hyundai is apparently quite proud of its test center located there, which is much more than just a base camp from which developers and test drivers leave for tours on the Nürburgring or on the other Eifel roads. It is not for nothing that the GPS coordinates of the test center are immortalized on the new special models, which are called i30 N Drive-N Limited Edition.

The two bronze-colored plates, which refer to the “house of N models”, are of course not the only visual difference to the standard i30 N with a hatchback or hatchback body. Painted in Phantom Black Pearl or Serenity White Pearl, the cars also feature 19-inch matte bronze finish alloy wheels, black Hyundai nameplates and decorative side, front and rear decals.

With performance package as standard

Unsurprisingly, the performance package comes standard. This means: The Hyundai i30 N in the Drive-N Limited Edition still delivers 280 hp and drops a maximum of 392 Newton meters to the front wheels. The special model is available with either a six-speed manual gearbox or the eight-speed dual-clutch transmission. But only the latter offers the possibility of activating ten additional HP for 20 seconds by pressing the corresponding button.

The 19-inch wheels have a matte bronze finish.

Also, full equipment is one of the features of the Hyundai i30 N Drive-N Limited Edition. The rear strut helps with driving dynamics, the glass roof increases comfort. The same applies to the heated steering wheel, the central 10.25-inch touchscreen and the cover with which smartphones can be charged wirelessly. The Smart Sense security package is also fully equipped.

Alcantara instead of leather inside

Instead of leather, Hyundai mainly uses Alcantara in the interior, which can be found on the steering wheel, gear lever, armrest and handbrake. Red accents can be seen not only here, but also on the seat belts, the N buttons on the steering wheel and on the lightweight sports seats, which also have new patterns. Seat mats feature exclusive lettering. 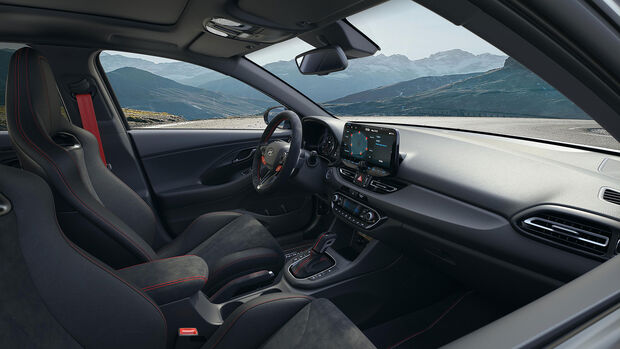 Inside, the Hyundai i30 N Drive-N Limited Edition has lots of red accents and lots of Alcantara.

There is also a plaque inside. It informs about the serial number of the respective car, which means: The Drive-N Limited Edition of the Hyundai i30 N is limited. In total, the Koreans will build only 800 copies, of which 620 will come to Europe. The remaining 180 units are destined for the Australian market. Production already started at the end of April; However, Hyundai has yet to announce pricing.

No, assemble my equipment myself!

With the i30 N Drive-N Limited Edition, Hyundai is launching a special model that primarily impresses with its special look. Other selling points are the complete equipment and the limitation to only 800 copies.