When it comes to luxury and power, the Mercedes-Maybach GLS 600 4Matic sets the bar very high. Brabus is still aging the base model with its new 900.

In order to understand the basis where the new Brabus 900 comes from, here are the data of the Mercedes-Maybach GLS 600 4Matic: With an electric boost that can be called up for a short time, the engine, whose heart is a The engine with combustion is a four-liter biturbo V8, delivers 426 kW ( 579 hp) and a maximum of 730 Newton meters. The 2.8 tonne vehicle accelerates from zero to 100 in 4.9 seconds and has a top speed of 250 km/h. The luxury SUV costs at least 168,147 euros. However, you don’t have to remember all the numbers – the Brabus 900 will smash them anyway.

Bottrop’s latest achievement delivers 662 kW (900 hp) and would tackle the power transmission with a maximum torque of 1,250 Newton meters if it were not limited to 1,050 Newton meters to protect it. On a standing start, the speedometer needle passed the 100 km/h mark after 4.2 seconds. With additional acceleration, it continues to rotate up to the value 320; at this point, the electronics terminated the high-speed agitation.

Lots of new features under the red carbon

To achieve such leaps, complete modifications of the V8 power unit are required, the displacement of which increases to 4.4 liters. Many refined components can be found under the engine cover in red carbon: new crankshaft, new fuel pumps, new intake duct, newly calibrated engine electronics. And of course new turbochargers, which surpass the series counterparts with their boost pressure of up to 1.4 bar. On the exhaust side, Brabus has optimized the exhaust system with a stainless steel system which, despite the flow-friendly metal catalytic converters, does not undermine the Euro 6D ISC FCM emissions standard. The exhaust tone can be controlled from the driver’s seat.

Brabus has changed the appearance of the Mercedes-Maybach GLS 600 4Matic more subtly than the drive technology. The most striking thing is the grille, which trades its chrome look for the “Shadow Grey” color scheme. Incidentally, the same applies to all other chrome trim parts. The Ruhr area troops add a spoiler lip and carbon inserts to the front apron. The rear apron has a central insert with a diffuser look, which accommodates the square tailpipes of the exhaust system on the side. Running boards that extend electrically from the side skirts and the usual badging, including those with “Brabus Masterpiece” lettering, complete the makeover.

Okay, carbon fender flares are also added. But the parts fit relatively harmoniously into the shape of the Mercedes-Maybach GLS 600 4Matic. They require new large wheels, which ride in the wheel arches in the form of Platinum Edition One-Piece M Forged Wheels. The round pieces measure 10 x 24 inches in the front and 12 x 24 inches in the back. Continental SportContact 6 tires are used in sizes 295/35 R24 and 335/30 R24, and Brabus has also lowered the standard air suspension by around 25 millimeters. 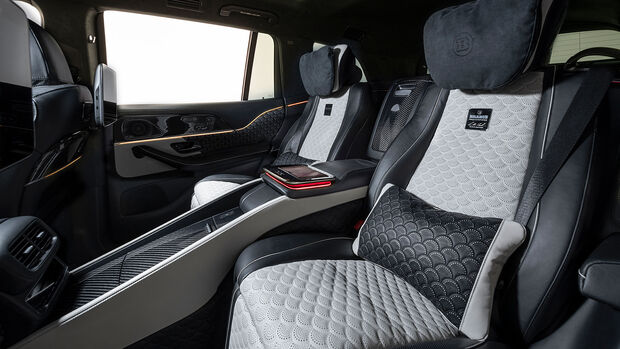 The cream and black leather interior is just one example.

The interior can only be described as an example, because the people from Bottrop always adapt it perfectly to the respective customer needs. In the case of the photo vehicle, it is a two-tone black and cream design whose main material is a particularly soft leather. The shell-like design is not only found on the seats and inside the doors in the form of quilting and perforations, but also on the mats and additional rear cushions that are included. Otherwise, there is a material mix of carbon, aluminum (pedals) and stainless steel, which is processed in the illuminated door sills.

Since each Brabus 900 is specially made to order, or buyers can have their own Mercedes-Maybach GLS 600 4Matic converted into a highly customized 900, Brabus does not quote prices. However, one example that appears to be the car pictured is currently for sale on the refiner’s website. Its price: 503,558 euros – barely three times the base car in series.

Yes, I wish I could drive in the back.

No, that would be too big for me and applied a little too thick.

Well, this Brabus 900 isn’t exactly a sleeper. But a certain understatement is inherent in the old Mercedes-Maybach GLS 600 4Matic. In any case, you cannot say that the tuned version is so much stronger and more expensive than the original. At least not at first glance.