If the Chinese manufacturer is to be believed, the ZTE Axon 40 Ultra will be the flagship smartphone par excellence. While a 64-megapixel triple camera was already announced, today it’s the invisible front camera and the 2nd generation stereo speakers, where breathtaking “Snapdragon” sound awaits us.

We have already received preliminary information and images for which we did not have to sign non-disclosure agreements. After the last post, where we also used the image as a cover photo, we received a call from China in the GO2mobile editorial team shortly after posting. In a tearful voice, ZTE asked us to delete the image. Of course, we complied with this, because we want to keep our test position.

ZTE Axon 40 Ultra will be the ultimate flagship

The direct information also included technical data which we were not asked to delete. So I guess we can continue to report the 6.8-inch AMOLED display a “trend-leading” 16-megapixel Under-Display Camera (UDC). The same goes for the 2,400 x 1,080 pixel resolution at 399 ppi (True Full Display) and a refresh rate of 120 Hertz.

This camera has now been publicly discussed again on Sina Weibo. We are now in the 3rd generation UDC. In 2020, the manufacturer was already a pioneer with the ZTE Axon 20 (unboxing video), but the quality of the selfies was not yet suitable for everyday use. A year later in the ZTE Axon 30 (for testing) it was visibly better, but still worse than the competition with their “normal” punch-hole cameras. Thanks to the 2.24 micrometer pixels and the “Proactive Vision Algorithm” of version 3.0, now is the time. Here is a test photo from the front camera. 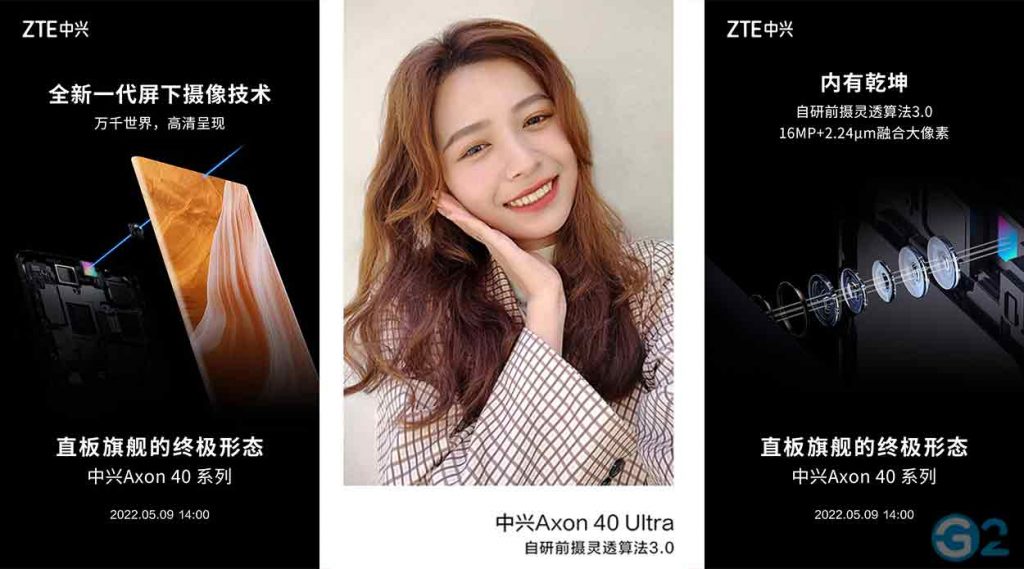 It should be three 64 MP cameras

The ZTE Axon maker also highlighted its extraordinary 64-megapixel triple camera. So just to understand: three 64-megapixel cameras! The main camera is supported by a Sony IMX787 image sensor and the ultra wide angle and periscope cameras are each supported by an OmniVision 64B image sensor. Allegedly with optical image stabilization and 5x lossless zoom.

The company drew particular attention to the “Snapdragon Sound” of the second-generation stereo speakers. According to their own statements, the DTS:X-Ultra acoustic experience is “surprisingly thunderous”. DTS:X Ultra lets you specify different tonal qualities for each sound, including location, movement, size, focus and more. We’ll see. It mostly feels like a hit to me. I’m more into high fidelity. But as I said, the test sample is on its way to the GO2 editorial team. The release in China is May 9. However, this will follow globally in due course.